The Cover That Never Was 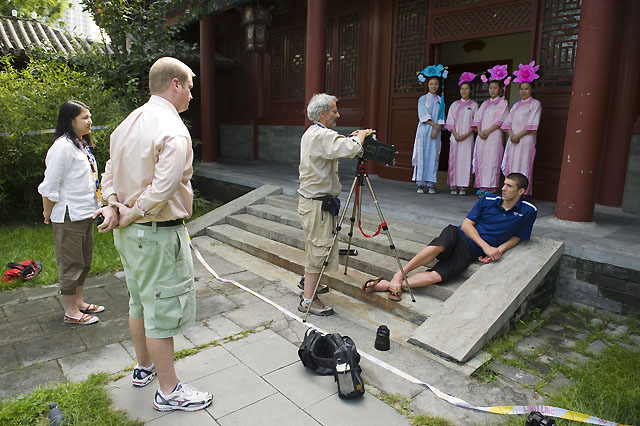 I’ve seen this before, with presidential candidates, sports stars, people who’ve survived plane wrecks, you name it. They are so hot, things are so busy and so confusing that they just don’t know what to do. Luckily, there’s a group of people out there willing, for a percentage, to help these folks out.

It seems you can’t make a picture now days of anyone of any importance without dealing with some type of PR/agent person. Deals need to be negotiatied, conditions set, promises made, and then just maybe you’ll have the privilege of putting one of these people on the cover of your magazine.

David Burnett and I were comissioned by a high-profile magazine to make a cover image of Michael Phelps. Actually it was David who they wanted. David to his credit and as a testimont to his experience suggested that both of us do the shoot at the same time. It was a pretty smart and somewhat bold idea. Two sets of eyes, two brains working togeather to make the most out of the five minutes that we’d (hopefully) get.

I (in turn) was glad to have the opportunity. It helped me to overcome a blow to my ego. Good news, ego fully intact.

David and I met about three hours before the VISA sponsored press event that would be our first chance to make a few frames.

After getting “magged and bagged” in order to get into the secure location, we were told we had to get out of there right away. Thusly we immediately averted our eyes and were lead posthast from this rarified realm. There would be no scouting of this location.

There was an issue with a lack of VISA signage on the moderator’s podium. It took a good thirty minutes, seven VISA-blue clad minion and a liberal amount of double-sided tape before this problem was fixed.

We nearly lost one of our own when (I’m guessing) a portuguese photographer stumbled through a four hundred year old room divider while entering the press conference. A chinese healing ointment helped soothe the photographer. No word on the fate of the divider.

Suffice it to say, it was no surprise when three hours after the press conference ended David and I were still awaiting our five minutes. It seems that publications like the FINANCIAL TIMES were a little higher on the food chain then us.

We can all be thankful however, for the top-notch buffet the kind people of VISA supplied to keep us in a dumpling induced stupor during the wait.

Our chance came with little warning. We were quickly hussled out to a bleak, security taped, shadeless courtyard. Not the open shade, tree filled, pagoda background(ed) location I had requested.

We brain stormed for a good thirty seconds. David found a perfect spot with nice open light (no time for strobes here). I secured a posse of pink clad chinese waitresses for the background. This was the best we could do, and I must say it wasn’t bad.

Now, the shoot was already 70% dead at this point. The cover was suppose to be Michael and his mom, but the mom had fled the country a good two hours ago. We could only soldier on and do our best, without the mom all deals were off.

Its a shame, now the people at Octagon (the sporting agency that represents Phelps) in my opinion really screwed up here. Not only did they try to sell the exclusive rights to pictures of Michael with all eight of his Beijing medals (rumor has it the highest offer was only $225,000, which I guess was not enough to tarnish the gold so no money changed hands), they really screwed the good people at VISA.

How much do you think VISA spends in advertising every year (not to mention dumplings)? I don’t know, but Morgan Freeman is voicing the ads for the Phelps commercials and he doesn’t come cheap.

They could have had that prestigus VISA signage, which was on the shirt Michaels was wearing, on the cover of a magazine that has somewhere north of 30 million readers, but they didn’t deliver.

Octagon guys, that ten or fifteen percent your getting... that comes from companies like VISA. You could have really helped everbody out here, but at least you didn't get yelled at today, right?

Posted at 04:05 AM in Somethings Never Change, These Modern Times | Permalink | Comments (1)

I really appreciate the time you have taken to make this blog during the games. It has been interesting reading this and seeing the images compared to other blogs out there.

I am sure your image of Phelps and his mom will sell well, I have been hoping for a story about that moment.