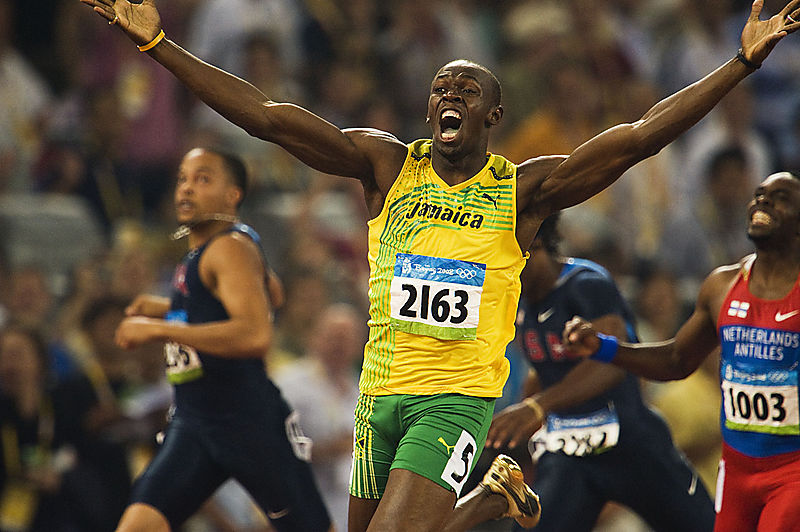 (Note: I just got ahold of the raw files so I went back and reprocessed these shots. The early files had been resized a couple of times so they didn't really show the true image quality. If you click on these you'll get a bigger image too. I also decided that I liked an earlier frame of the image below. So I changed that too. Photographers really shouldn't be their own editors.)

I'm shooting a pretty good games here, perhaps out of experience. This however is an example of an image that technically wasn't possible before the Nikon D3 hit the scene.
I made this through 1040mm of glass at 1/500 of a second at f6.7 at... 3200 iso. This file is smoking. The quality is stunning, its just hard to believe.
In the past I would have shot this using the slowest film speed possible. Think Kodachrome 200 pushed a stop and a third (at the most). It took me almost two weeks, but I decided to trust the camera and use the higher iso speeds.
Lesson learned.
I've adapted.
There was a slim chance that this angle would even work. The Nikon gear allowed me to take that chance.
Somebody asked me at the track why I was using so much glass, I said, "This is the Olympics. What are you saving it for?"
Not only was this angle something a little different for a sprint finish, it also allowed me to be under the scoreboard when Jamaica's Usaim Bolt looked up to see his world record smashing time in the men's 200. 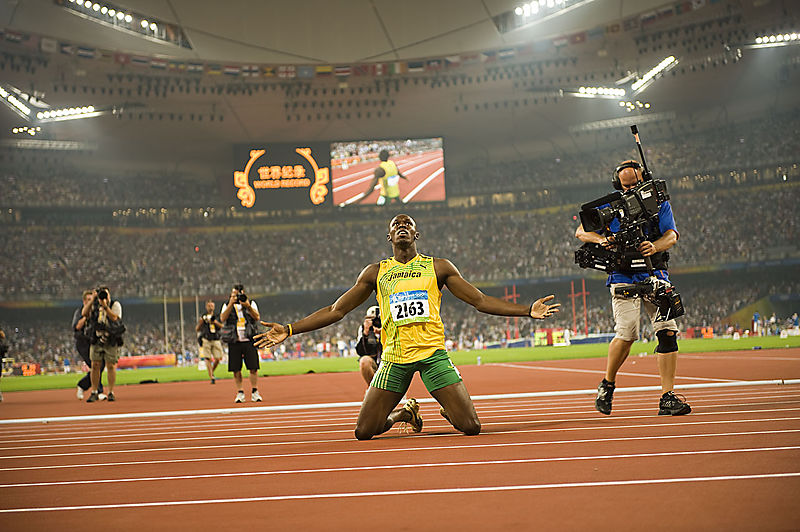 The photographer's moat was empty at this spot. Just me and two other photographers for ten yards in either direction.
OK, now that the Nikon ad is out of the way, let me explain why this is a world exclusive.
Do you believe that I was unable to get this image published in the mainstream press... anywhere (at least to this point)?
Yeah, me either.
This just happens to be from the Olympics, but right now there are photographers producing amazing work all over the world, who are also unable to get it published. Except maybe on a blog here or there.
Publishers, I know you want to drive readers to your websites. I know once they get there you want them to stay. Listen, the only way you are going to accomplish this goal and save your penny-pinching, massive layoff inducing, sorry asses is by publishing content of the highest possible quality.
When are you going to learn?
When are you going to adapt?

Really fantastic shot. YOu must have a good camera? Huh?
Just kidding. I have really ben enjoying you work. Keep it up.

Beauty - but OMM at least (FF and IE both) the shot is getting resized so it's not as purdy as it ought to be. You might need to trim the width just a bit.

As far as I can tell, it's ABOVE iso 3200 that one can make an "image that technically wasn't possible before the Nikon D3 hit the scene." Up to iso 3200 the Canon 1DmIII is produces just as primo a file as the D3. Matter of fact, up to iso 3200, many, including myself, prefer the file out of the Canon. It's above iso 3200 that Canon -- any Canon -- needs to go hide and cry.

As for the press and "the only way you are going to accomplish this goal and save your penny-pinching, massive layoff inducing, sorry asses is by publishing content of the highest possible quality," I hear ya and applaud as loudly as I can.

Fabulous photos, by the way. You rock! And Keri says hello. Best!

The five photographers in the back of the second frame pretty much explain much of the problem......but Ken, for gods sake, enjoy it while you can.

You're whining again... You sound like a cop who blames criminals for his job being so shitty. "If it wasn't for the criminals..." You chose the profession for the good and the bad. Looks to me like you can't even be happy at the Olympics when most of the rest of us sit here and watch you. Shut up and enjoy your donut time...

BTW, pretty average shot, maybe that's why it didn't run anywhere, nobody was as impressed with the shot as you were. Guess the rest of the world isn't as enlightened as to whose camera the image came from or maybe they're just tiring of you and getting another image somewhere else. See hubris in your local dictionary I think you'll find one of your images there (yourself).