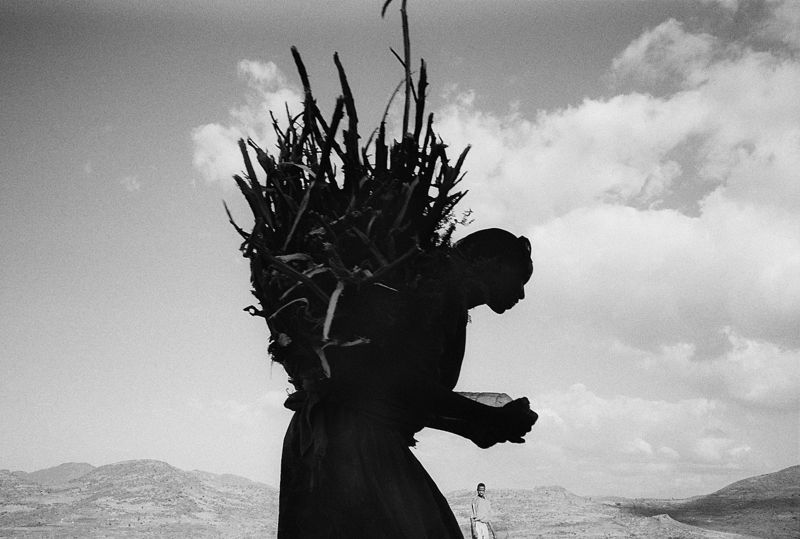 A few years back I traveled to Ethiopia. The country depends on two rainy seasons each year and the first one had failed, which meant the teff crop was in danger.

I couldn’t find any reporting on the situation, so U.S. NEWS & WORLD REPORT sent me there to find out what was happening.

When you’re doing a story on something that hasn’t, but may happen you kind of have to look for both symbolic things and images that show a change in people’s behavior (in response to what might happen). You’re not in the “starvation phase” (for example) at which point it is fairly easy to figure out what to make pictures of, you’re in the “what if” stage.

I spent about ten days there driving from Adis Abeba (I guess that’s how we’re spelling it now) to Dire Dawa and back. Just looking around, talking to both normal people, and aid workers trying to get a sense of what was happening.

This image was made on a stretch of road coming out of the mountains just west of Dire Dawa. There’s a community well not far from here, so there are women walking back and forth to get water along this road, which is why I was hanging out here. It was about 11:00 in the morning, so you can also see that the bright sun is very harsh right now.

Because of the light, I started to work the silhouettes of people as they moved along in the shadow falling on the road. Combining them with the puffy clouds and expansive view of the valley below seemed like the best way to make a picture in this situation.

As the image was coming together, the little boy popped over the side of the road and just froze and stared at me. He must have walked up from a home below us. I can’t really blame him. I’m sure a big guy sitting in the middle of the road was the last thing he expected to see that morning. Normally, unless in a portrait situation I really don’t like people looking at the camera. Knowing that throwing rocks at the kid to get him to move would ruin the situation, I decided to make the best of it.

I was shooting a Leica M6 with a 35 mm summicron, which means you only get one frame, the other good news is because its a rangefinder you can see exactly when to make that frame. This is one of the reasons that traditionally people have used a rangefinder instead of an SLR for street photography.

In this example you can see how the composition needs to be before you make the frame. You want the child to be small and right at the edge of the larger figure of the women dominating the frame. If you were shooting with an SLR, you’d be tempted to blast three or four frames to get the composition right, which can destroy an image almost as fast as chucking rocks.

The image was made on Tri-X, which if you expose it properly, which means to overexpose it, you’d have quite a bit of shadow detail, which is important. True silhouettes are boring to me. I really think you need some detail in the shadows like there is here.

As reportage, this image shows an almost barren vista stretching as far as you can see. It tells you this is a hard place to make a living. The woman carrying firewood to sell tells you that maybe farming isn’t doing as well as normal. The harvesting of firewood in this manner is a poor country’s readymade cash crop. The wood is used to make charcoal which has a strong environmental affect. Nations like Haiti have become completely deforested from the practice. This shows a change in behavior in this country, farmers selling things to others instead of producing crops for themselves.

Silhouettes (in general) can be useful because they are symbolic in nature, rather than seen as a documentation of a particular person at a certain time.

Symbolically, the strong woman towering over the tiny figure is sheltering it from the harsh environment, even as her own back is literally bent from the effort.

So in this regard the image works on different levels, which is something that photography needs to last.

Speaking of symbols of strong women, if you kind of squint you’ll see that the woman’s silhouette can also be seen as the head of a roaring lion, with the sticks becoming the mane.

Yeah, I don’t make these things up. A six year old girl was staring at this print one day and started asking me about the “lion”. I had no idea what she was talking about until she explained it to me. Then it happened again with another little girl, so I guess there’s something to it.

Posted at 11:56 AM in How was that done?, Photo/Tech, Talking Photography | Permalink | Comments (1)