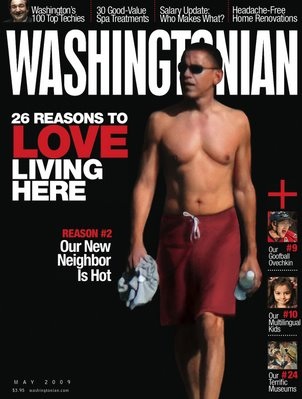 WASHINGTONIAN political reporter, Garrett Graff told the AFP that they've been "swamped" by reader response to their May cover showing a topless Obama.

Unfortunately for the magazine, Susan Moeller, someone you should know, writing in the HUFFINGTON POST, pointed out the uncomfortable fact that the image has been altered.
Graff went on to say (to AFP) that Moeller was up in arms over nothing, "We didn't change the concept of the picture."
After making a few more meaningless and silly excuses he added this whopper,
"This is much ado about nothing. It's not like the Iranian government's shot last year where they added a whole fourth missile."
Since when is not being as dishonest as the Iranian government a valid journalistic standard for the American news media?
Here's the image they started with... 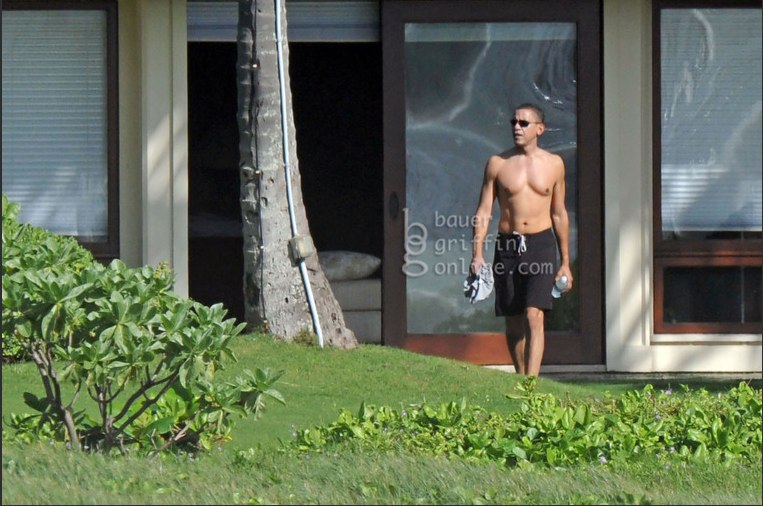 Garrett, enjoy the traffic spike.
You must realize of course, if you ever get a really big "scoop", something along the lines of Watergate, there's absolutely, in my opinion, no reason why anyone would trust your words.
At this point, we can't even trust your publication to accurately report the color of a pair of swim trunks.

Posted at 10:59 AM in Current Affairs, Editors, These Modern Times | Permalink | Comments (4)

Whoever made that photoshop decision? Line them up and cut them down!

this wasn't presented as a news story, it is editorial and quite apparent that the photo is altered in at least one respect - there is no background.

I have to agree with Jon T and sympathize with Garret's assement. The shorts clashed with the colour scheme of the rest of the cover, it's a small change compared to the PSing of models on most covers. No big deal.

NO, it is not acceptable to change the color of his shorts. Where is the line? Maybe trim him down a but more (or add a few pounds depending on your politics?) Why not change the cover design rather than alter and falsify the photograph? Why is the cover design/color scheme more immutable and sacred than the photograph? The President is not some cover model; there is no equivalency here.