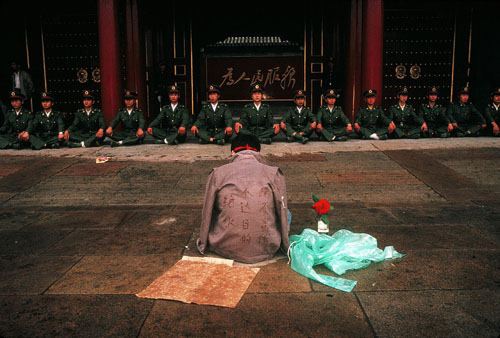 "The Rose, Beijing, 1989" by Kenneth Jarecke/Contact

Normally, as a photojournalist, you try to fade into the background. You have to be in the room, but you can't be part of the show. Tricky. Self-promotion is another tricky skill. It's pretty much the opposite of the cloaking device we normally try to deploy. Few great photographers enjoy both skills. Some do, like David Hume Kennerly, or Vincent Laforet. They can make a great image and then make sure it gets seen. This is a skill I admire, but sadly don't share.

That said, let me say with all humility, that this image is a keeper. It's a real piece of history captured on a 35mm slice of Kodachrome 200.

See, now I feel all uncomfortable.

It was early in the morning during the first big week of the Tiananmen Square student protests. There were about a million people demonstrating at that point and the rest of the world was starting to take notice.

I was working with an Australian photographer that day.

I remember we'd just left a hotel where we caught some breakfast. We were walking east along Chang'an Avenue towards the Square and came across a huge crowd mingling around some government bureaucrat housing. It was hard to see what was going on. When we managed to make our way to the front, we found this lone hunger striker sitting in silent protest in front of a row of (I believe) PLA soldiers.

I'd photographed this guy the previous two days. At that time he was pretty much on his own. Now he had a following. They didn't want to let us inside their makeshift security perimeter. It took some negotiation, err, heartfelt pleading, but they eventually relented.

I think they made us take turns. I don't quite remember, but once I got inside, I worked this scene with a 200, 85, 35 and a think this frame was made with a 28mm lens. I shot vertical, horizontal, centered, and framed to the left and the right. This scene could have been published a hundred different ways. I made so many versions you probably could have done a tri-fold. I used Kodachrome 200, two kinds of Ectachrome (an E-6 film that allows for quicker processing) and maybe even Kodachrome 64. If I had some Polaroid, or Tri-X, I would have shot that too.

Usually, you don't really know if you made a good frame. This wasn't one of those times.

It was a double-truck in Time the following week. I think the version they used was centered to the left and made with the 85 or the 200mm.

This view, straight forward, clean, no gimmicks, is the best. The drum scanned K-200 just sings.

I saw this guy a few days later. He was collapsed and rolled up in a blanket. There was no way I could get anywhere near him again. I have no idea whatever happened to him.

I think, "The Rose" is an apt name for this image.

Here's the link. Give a thought to purchasing this print or one of the nine others.