Let's Be Professional About This 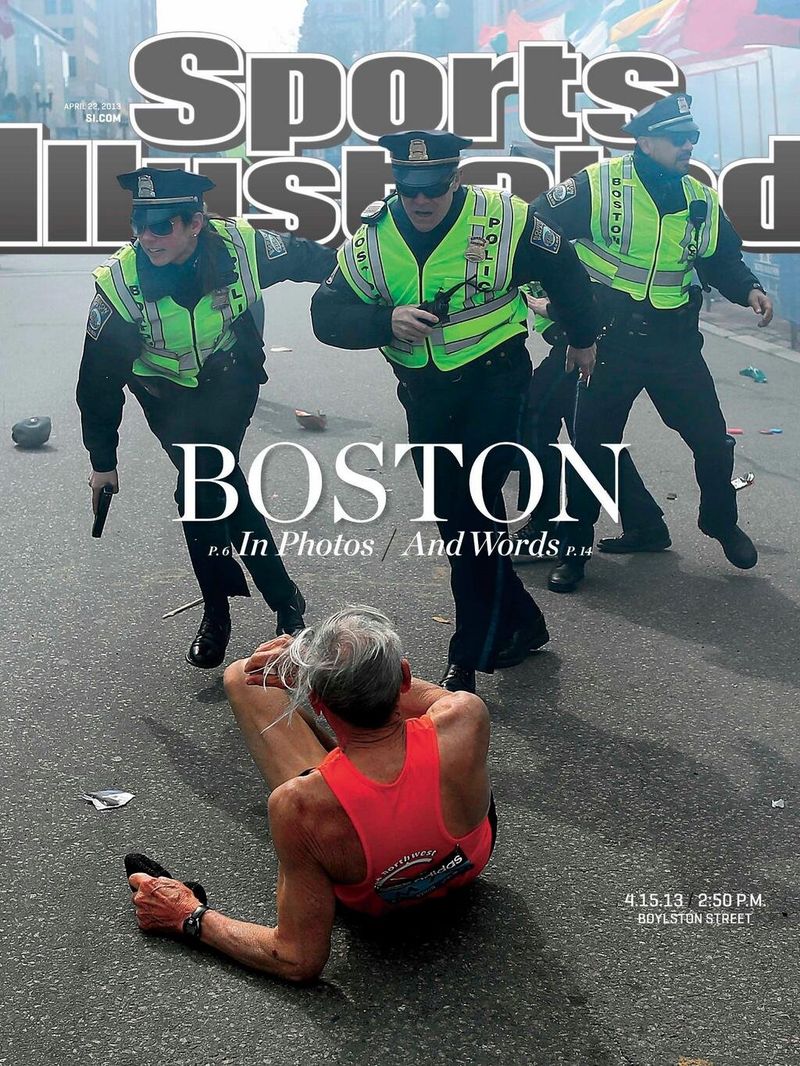 There’s a big difference between a professional plying their trade and an amateur. In this image I see evidence of two people (in particular) reacting to an unexpected attack, an atrocity, in a professional manner.

The first is the officer on the left, who unlike your average celluloid action star, has her finger in the proper position and not on the trigger of her weapon. The second, is photographer John Tlumacki of the Boston Globe who captured THE moment in a straightforward manner without any photo-gizmo trickery.

The image is a testament to experience and proper training (on both sides of the lens). It also puts the lie to the idea that social media, inexperienced witnesses and camera phones are a suitable replacement for a PFJ.

There’s a video of this moment as well. It was either made by an amateur or the absolute worst camera operator on the planet. The video fails on most levels. but most strikingly when it pans away from the scene so perfectly captured by Tlumacki and instead tilts skyward at smoke and broken windows. The video shows us little of what’s happening at street level (although one can catch a glimpse of Tlumacki helping to move some barricades). In doing so, the camera operator robbed the viewer, history and criminal investigators of a clear picture of what happened seconds after the blast.

(From a photojournalist’s perspective, it also robbed us of another example of how video of an iconic moment usually fails to have the same impact on the viewer as the still image, but that’s hardly important at this point.)

Some have criticized Sports Illustrated’s treatment of the image. Saying the pop-out figures gives it a comic book feel, but that rings hollow with me. In fact, I think it’s quite effective. Heroes (comic book or otherwise) are normal people who are thrust into extraordinary situations and react in heroic ways. In other words, cops aren’t any more super than anyone else, until they are.

That said, I salute the editors of S.I. for publishing this amazing image as well as they did. Perhaps it was because their tight deadline prevented them from talking themselves out of it. I don’t know. I don't care. They got it done, and that’s what counts.

With that, I'd like to make a quick comment about the first episode of a new reality show called “The Moment”, hosted by Superbowl winning quarterback Kurt Warner. Unlike the moment captured by Tlumacki, this show is scripted, exploitative (of both their subjects and audience), unbelievable, predictable and total removed from reality. Which explains why on TV it’s called a reality show. Its gimmick, err, premise, is that it gives people a second chance to live their dream.

In the first episode, Warner gives working mom Tracie Marcum a second chance at being a Sports Illustrated photographer. We're never told when she got her first chance, or why a gainfully employed person would throw away a perfectly good job.

Marcum seems nice enough. She’s obviously deeply loved by her family, a decent bunch, and is ready and willing to work, but a sports photographer she is not. The show puts her through a two week “boot camp” where photographer Lou Jones, also a decent sort and veteran of fourteen Olympic games, attempts to turn her into a sports photographer. The prize is a job at Sports Illustrated.

The show puts Marcum through a bunch of silly exercises designed to turn her into a sports shooting machine. The cruelest of which is when they send her to a skeet range to photograph clay pigeons exploding as they’re shot. I say cruel, because SPOILER ALERT Marcum’s mother committed suicide with a gun, so the sound of gun shots freaks the poor woman out. Yeah, no manipulation here. The producers of the show didn’t put Marcum through this for some canned drama, the “exploding clay pigeon test” is one every sports photographer has to pass.

Okay, so it’s all in good fun. We all know nothing sells soap like a working mom’s tears.

As a viewer, I expected Marcum would earn herself a day rate or two for her trouble. Maybe shoot a golf tournament or something for the magazine. That’s when things got weird.

At the end of the show, Marcum heads to New York to meet with the director of photography and a highly acclaimed Sports Illustrated photographer who will look at her work and decide whether she’s earned herself a “position” at the magazine or not.

As Keanu would say, “Whoa.” Position? I thought we were talking “job”, not position.

To make matters stranger not to mention ironic, since the episode was shot, both the DOP, and the staff photographer (who judged her work) are no longer with the magazine (along with several other GREAT photographers).

Sure enough, SPOILER ALERT, Marcum wins a position at the magazine. On one hand, I have to say, “good for you girl," but on the other I’m wearing my “I can’t believe what I just saw” face (and yes, I usually wear that face on my hand).

As this episode was being shot, the magazine’s hierarchy, the same people that knew they were going to fire a bunch of people whose talents the magazine was built on, thought it was a good idea to send the message to America that anyone, given a two week training course, could be a Sports Illustrated photographer.

Is that what you want your subscribers to think? There’s nothing special here, nothing to see, move along. That given a chance (first or second) by Kurt Warner you too could be a Sports Illustrated photographer.

George Plimpton notwithstanding, can you think of a professional sports franchise that would attempt to sell season tickets with this premise?

Whether it’s our sports or the people shooting them, paying customers want the best. They don’t want to see their overweight neighbor playing for the Miami Heat. They want to see LeBron. Just like they don’t want to sit through a three hour slideshow of their neighbor’s eco-holiday, unless they happen to live next door to Sebastiao Salgado.

I know I’ve said this in a slightly roundabout way, but professionalism is important. Not only in important matters, like national security, police officers and other first responders, but also when it comes to the our press.

As a photographer, a journalist, and a consumer of news, I’m tired of the mediocre spirit that has infected our publications today.

We don’t need another overly clever youngster, running around in tiny jeans, thinking the story is about them while attempting to make self-relevant snaps with their iPhone. Can’t you just picture it? A blood stained sidewalk, maybe a tattered piece of red, white and blue bunting, a cross processing filter...

What we need is some old school PFJ’s that know how to capture a moment in a way that is relevant and insightful, but also true. Yeah, I said it. Images can be true. Regardless of what your goateed, sports coat with faux leather patches on the elbows wearing, college professor told you.

What we want (and by "we" I'm probably only talking about me), what editors should be trying to deliver (and what we got for a brief moment this week) is some photojournalism which harkens back to the Boston Globe of the eighties. This is what we need and anyone who thinks otherwise deserves to have Stan Grossfeld's non-ironic Chuck Taylors shoved right up their arse.

Emphasize the J in PJ!

I'm confused as to why the other 2 police officers in the photo were not cited in your 2nd paragraph as reacting in a professional manner. I realize you said in the first paragraph "In this image I see evidence of two people IN PARTICULAR) *bold mine* reacting to an unexpected attack, an atrocity, in a professional manner.", however, the omission from them in the 2nd paragraph makes one wonder if you believe the omitted two were doing something unprofessional.

I'm not sure if I understand the reason for your confusion. I think you may have answered your own question when you quoted my post.

What I'm saying is the photo shows evidence of two particular people doing their job in a professional manner in a stressful situation. The police officer with her weapon drawn is showing the results of her training, when in a stressful situation she keeps her trigger finger outside of the trigger guard where it is suppose to be. The photographer who made the photograph is also showing the results of his training and experience, as he actually made the photograph while under similar stress. Knowing what to do is different from actually doing it when the adrenalin is flowing.

I'm commenting on what the photograph shows. I'm sure the other two (actually three) police officers are just as professional, but I'm not sure if this photograph really highlights this or not.

I hope this answers your question.

Interesting testament to the ripening old age of digital social media, and the state of photojournalism. I first saw this image, UNCREDITED, on Facebook! Because of it's appearance, uncredited on FB, and in spite of it's obvious iconic magnitude, I falsely assumed it was possibly an image from an amateur or non-professional, (being as there are so many, far out numbering the professionals at any public event today) that snapped, excuse the expression, a lucky shot. Before I knew who took it, I likened the image to that Of Eisenstaedt's VJ Day image from Times Square. Two days later I traced a link from my NPPA mailing to discover that it was the work of a committed veteran of photojournalism. An acquaintance whom I had proudly worked events with in the past and know professionally. I felt pride in knowing him, and glad for him, being safe, and delivering grace under fire. John Tlumacki is deserving of a Pulitzer prize and that is no accident. It is the result of a lifetime of hard work, sacrifice, and commitment to a profession that has and will continue to recreate itself and adapt to our rapidly changing world. Sadly, there is no LIFE Magazine cover, photo essay, telling the story of the unfolding inhumanities of our times. But, even as Richard B. Stolley would have to agree upon, I point out there is a cover and a sellout shelf still allocated to the celebrity scandal. For the most part, the public get's what it is willing to pay for in terms of photojournalism. I question which will sell more copies, a tribute to, "Remember the Marathon", or SI Swimsuits?