Yes, I am Going to Keep On Loving You 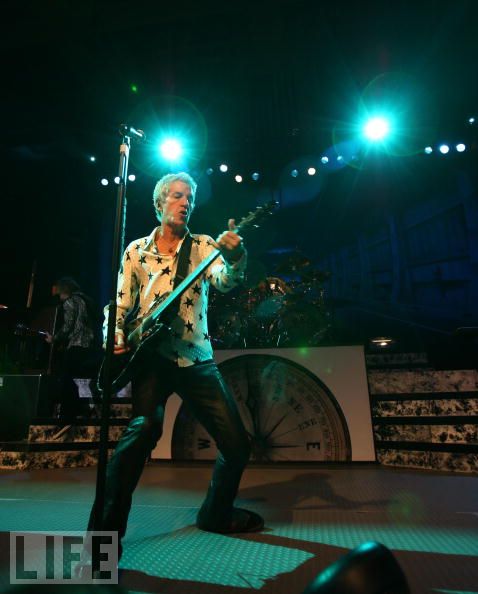 Bennett Raglin/WireImage via Getty via LIFE.com

I just can't fight the feeling. I really need to share this. Rocker of REO Speedwagon fame, Kevin Cronin bought a print of mine a little while back from the Toucan Gallery in Billings, Montana!
Being a child of the seventies comes with certain responsibilities. One of which is to embrace and share exactly how big-hair goofy you actually are. So it is with great pride and humility (if those two can go together) that I publicly declare that REO rocks yesterday, today and tomorrow.
I'm also proud to report that Kevin was a totally great guy. He makes a point while traveling of visiting local galleries AND purchasing work to help guys like yours truly to keep ridin' the storm out.

How cool is that?

When I think old school, I think Frank, Dean, and Sammy, cats like that.
If I was really on my game (back in the day), I probably could have photographed all of those guys, but now they're gone. It wouldn't have been anything like their Phil Stern heydays, but still something that could have happened. Maybe Frank at the White House or something. Just to say you did it, that you shook Frank's hand, as they say.
I guess there's still a chance to do Don Rickles, which would be cool.
Blind item alert:
I was at a fundraiser at Bob Hope's house (with then VP Bush), and another photographer (A+ list with B list name recognition) walked up to Rickles and  started talking to him about a book project he was working on, Rickles cut him off and said, "Are you a cop? You look like a f#cking cop. I don't talk to cops."
Anyway, when you think about cultural icons that you need to photograph, you usually don't think about the people that it's still possible to do. I guess if you did, you'd have to start working towards achieving that goal.
Prince is one of those people that I should photograph. I saw him (only once) in concert, and spent the whole time thinking about all the photographs I could be making.
Marlon Brando, shouldda maybe couldda, but too late.
I wonder who else?


Now this is interesting... there's a lot happening here.
What are we going to do with you, Kutiman/Ophir Kutiel?
You're the real deal. This mash-up mix reveals both your musical and visual talents. I don't know how deep you roll, but if you did this by yourself... if that's even possible... color me impressed.
I suppose we'll have to give you a pass on this first one. That seems to be how things work, but those days are gone. You're going to be rich and famous. Just like the first rap artists that shamelessly sampled/pirated James Brown (and profited from his work) it's time for you to go legit.
It's going to be hard. Now you'll have to track down your "contributors". Get releases. Pay royalties, that kind of stuff, but it's the right thing to do.
Don't get all Fairey on us, where you've got 14 people working for you and big corporate clients, yet claim "fair use". If you go that route, I won't be able to enjoy your work anymore.
That's all I ask.